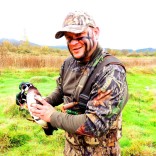 Troy Rodakowski is an award winning outdoor writer and wildlife photographer from Junction City, Oregon.  He has been blessed to hunt and fish throughout the Pacific Northwest and Canada.  Born and raised in the Willamette Valley, he has had the pleasure of hunting all of the big game species in the area as well as wetting his line in many of the waters throughout the land. Troy has appeared in numerous newspapers, magazines, outdoor radio and television programs. He is currently writing for Northwest Sportsman magazine, American Shooting Journal, Oregon Hunter, Washington-Oregon Game and Fish / California Game and Fish magazine, Bear Hunting magazine and several others. His travels have taken him around the world in which he has visited over 30 different countries where he has also enjoyed many outdoor adventures.  He also enjoys a full time job managing a vegetable seed company located in Junction City. Additionally, Troy serves on the Board of Directors for the Northwest Outdoor Writers Association. With a strong belief in Christianity and family he gives all the glory of the outdoors to God and hopes to pass on his families many great traditions as well as the hunting heritage of our forefathers onto today’s younger generations.