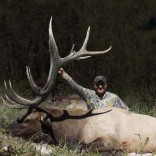 Nate is the true outdoorsman who has made his passion his life’s work, literally. Nate has guided big game hunts in the west for over a decade and been a part of over 190 big game kills. He has harvested many animals achieving Pope and Young and Boone and Crockett achievements. Nate pursues most western big game but enjoys Elk, Mule Deer, and Mountain Lions most. As founder and operator of Tightline Outdoors for over a decade, Nate and his team get people outdoors with multiple guide trips on Colorado’s lakes and rivers 365 days a year. Also a former walleye tournament pro, Nate has experience across a number of outdoor disciplines and is known as ‘The Authority in Western Outdoors’. He has appeared in many hunt and fish shows across Outdoor Channel, Sportsman Channel, World Fishing Network and Altitude Networks. You can catch him at a number of western states events and hosting seminars each year for ISE Denver, Bass Pro Shops, Ford, Vortex, Mercury, Lund and other sponsors. His wife is also a trophy hunter and both son and daughter will likely follow suit.